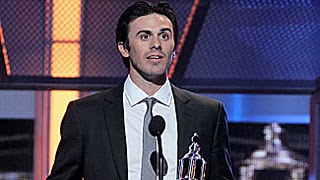 Everyone started to notice him, but specially after his charge in the 2010 Olympics. At this years NHL Awards Ryan Miller took home the Vezina Trophy as the NHL's top goaltender.

Take a look at an article that NHL.com wrote up about Miller's award winning night and year.

"It was so cool to see the cards with the award winners," Miller said.

"I look up to Marty quite a bit," Miller said of the four-time Vezina winner from New Jersey. "And Bryzgalov and I came into the American League at the same time, so it's been really fun watching him progress. He played with my brother Drew for a while, so I knew what kind of stand-up, character guy he was."

Backstage, Miller talked about the heroes whose names are engraved on the Vezina, including Brodeur and former Buffalo goalie Dominik Hasek. He also noticed Jacques Plante, the legendary Montreal goalie who is credited with inventing the mask, stopping for a moment to catch up with his emotions.