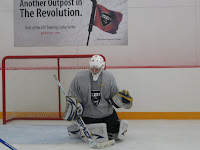 The SJHL's Bauer Conference Semi-Finals will see the match-up of the Melfort Mustangs and the Battlefords North Stars. The first game of the series is set for March 6th in Battlefords.

Melfort Mustangs goaltender Chris Ward will start in goal for the Mustangs. In his last season in the SJHL as a '89 born goaltender, Ward looks to cap off his Junior season with a run for the Credit Union Cup. The last time the Mustangs won was back in 1996.

For the full schedule and results of the series visit the Mustangs online.