What If Disaster Strikes? 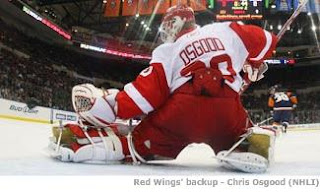 After the first night of the NHL Stanley Cup playoffs there have been three upsets with Phoenix beating the Detroit, Colorado defefating San Jose in the dieing minutes, and Pittsburgh losing to Ottawa.

Taking a look at NHL.com, one of the questions they dared to ask - which is a playoff nightmare for fantasy pool fanatics - What if disaster strikes? ...Which team is best positioned to replace its starting goaltender?

The thinking here is that a backup goaltender's overall career record and playoff experience are more important than the record he compiled this season as a backup. After all,Boston Bruins backup goaltender Tim Thomas is the reigning Vezina Trophy winner, and Detroit Red Wings backup Chris Osgood has won Stanley Cup. Yet both lost their starting jobs this season to Tuukka Rask and Jimmy Howard respectively.

To view the rest of the article click here.