When Do You Draw the Line? 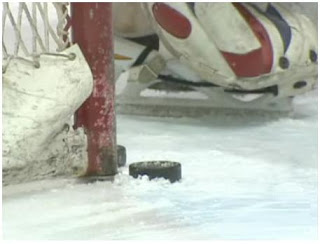 This past Friday a game was held to determine who would move forward into the playoffs for the A-Side of the Winnipeg Highschool Hockey League Semi-Finals.

In more importance, this game was mandated due to the Westwood Collegiate coaches throwing their previous game as they intentionally lost to College Jean Sauvé. Westwood was leading their quarterfinal matchup with several minutes left in the third period. When the coaches of the team found out that if they were to loss the game they would not have to play their rivals Oak Park they then proceeded to pull their goalie and allow two consecutive empty net goals, resulting in a 4 - 3 loss.

To pull a goalie was just in total contradiction of what high school athletics stand for. No matter who you ask, this intention by these coaches clearly puts a damper on the true meaning why people are involved with sport.

Credited as a high priority and a demand with sport, Winning has become one of the central discussions within arenas today. But, when you ask any athlete why they play the game, they typically respond with these three answers.

2. The sport is fun (Enjoyment)

3. I enjoy the competition (Excitment/Success)

I had wrote two connecting posts this past July as goaltenders were preparing for training camp. The first post related to why an athlete chooses to play their sport, and the second post was directed towards why an athlete loves the sport that they play. I recommend every reader to revisit both of these and take some time to think about the true reason for why they play the sport that they love.

This recent humiliation that took place within Manitoban Hockey has sparked a lot of interest and created a fair amount of disappointment towards the notion of what coaches are teaching young athletes. In a recent article posted by CBC News on March 5th, Mike Wake, president of the Winnipeg High School Hockey League, said, "High school athletics are about the spirit of the game." Diving deeper into the game of hockey one can look at the progression that each player goes through while participating in the sport. Within Hockey Canada's Long-Term Athlete Development model the aspect of training to win is labeled for Males and Females through the ages of 18 to 22. The previous stage in the model is training to compete, labeled for players at the ages of 16 to 18. No where in both descriptions of these stages is there a stressed statement of demanding nothing but a winning result.

With the enjoyment of competition being a large reason for hockey players dedicating numerous hours to the sport, one must consider the compete aspect being taken from the sport when the Westwood Collegiate coaches forfeited the game to play a different team. With Oak Park and Westwood being known as the provinces top teams the lead up to a game against them would have created an unknown amount of excitement and enjoyment for all of the athletes playing on both teams. Beyond this, winning that game would have created a sense of merit and value for each athlete and school - and now this value has been taken away.

The Friday game that was authorized by the league pitted Westwood against the team it tried to bump from the semifinals, the Oak Park Raiders. In proper fitting, Oak Park defeated Westwood 4 - 1 in the decision game to advance on to face College Jean Sauvé.

The Raiders won their Semi-Final game on Saturday in a tight 4 - 3 final that leads up to a much anticipated Championship Final Game this Monday as Oak Park faces St. Pauls.

For more on this story and to take an in-depth look into what took place, watch below as WPG Global TV reports and interviews several players from both parties.

Again, as a staff, GDI Prairies recommends to revisit your reasons for why you play the sport and what you love most about the game and the position.