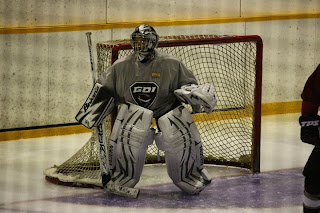 GDI's Dan Meyers tops the WHSHL sitting in first for goals against with 1.51 in his rookie season with St. Pauls.

The high school hockey league has been a fairly competitive year with St. Pauls, Oak Park, and Westwood fighting for first spot in their division.

Netminder's like Meyers, Garrett Shaw, and Brad Hill have been anchors for their teams, providing a way to win each game this season.

After the first round of the playoffs have wrapped up, the next branch will create a great battle between some of the leagues top teams. Tonight's match-up between Westwood and Vincent Massey looks to be a highly skilled affair, with veteran goaltender Byron Spriggs holding the fort in net for Massey.

The second round playoff match-ups are as followed: